The Blyth Festival is moving ahead with an ambitious outdoor stage project at the natural amphitheatre at the Blyth Campground.

In an interview with The Citizen, Festival Artistic Director Gil Garratt said that while a professionally-engineered outdoor stage will hopefully allow the Festival to move ahead with outdoor productions later this summer, he hopes it will be bigger than that. Not only can the stage be part of the Festival picture moving forward, but it could also serve as community infrastructure rarely seen in Huron County for musical performances or community celebrations like the Rutabaga Festival, Barn Dance Jamboree Weekend, the reunion of the Huron Pioneer Thresher and Hobby Association and more.

After months of development, the details of the outdoor stage proposal were finally approved at a meeting of North Huron Council in late May.

When the process began last year, Garratt said there were thoughts that outdoor shows may be produced in 2020. However, that was in the early days of the COVID-19 pandemic when no one thought it would still be ravaging the world more than one year later.

He did say, however, that the Festival has a unique history with outdoor productions like The Outdoor Donnellys and Many Hands, so he felt that, with the safety advice available at the time, it was a natural step for the Festival.

When the Festival first proposed the idea, it was part of a five-year plan. Garratt said that he and his team at the Festival saw the development of an outdoor performance space not just as a way to ensure the Festival would be ready to respond to any threats like COVID-19 in the future, but as an opportunity for years to come.

With a permanent outdoor stage, Garratt said he could see a future in which the Festival offered a full season in Memorial Hall, complemented by productions designed to be performed on the outdoor stage as well as at the Phillips Studio.

One of the first things he had to consider in terms of design was accessibility; ensuring everyone could see a show at the outdoor theatre space, so they needed to bring an architect on board. Garratt said the Festival maintained a good relationship with architect Jason Morgan of Allan Avis Architects, so he tapped Morgan to help with the project. Bringing him on board was made possible, Garratt said, thanks to support from Community Futures Huron, the Trillium Foundation and fundraising from donors and members.

The design has gone through a number of versions, Garratt said, as he was involved from the beginning. At one point, there was talk about performing out of a shipping container on the back of a truck. However, together they have come up with something much more professional and permanent, though shipping containers will still play a role.

He also said an integral part of the space will be connecting to nature and being under the beautiful Huron County sky with the treeline and Greenway Trail, part of the Goderich-to-Guelph Rail Trail system, in the background. In fact, several trees have already been planted at the space with the help of the Maitland Valley Conservation Authority with more to happen in the coming months.

Essentially, Garratt said, the stage will look like a giant patio, approximately 40 feet squared in a diamond shape towards the 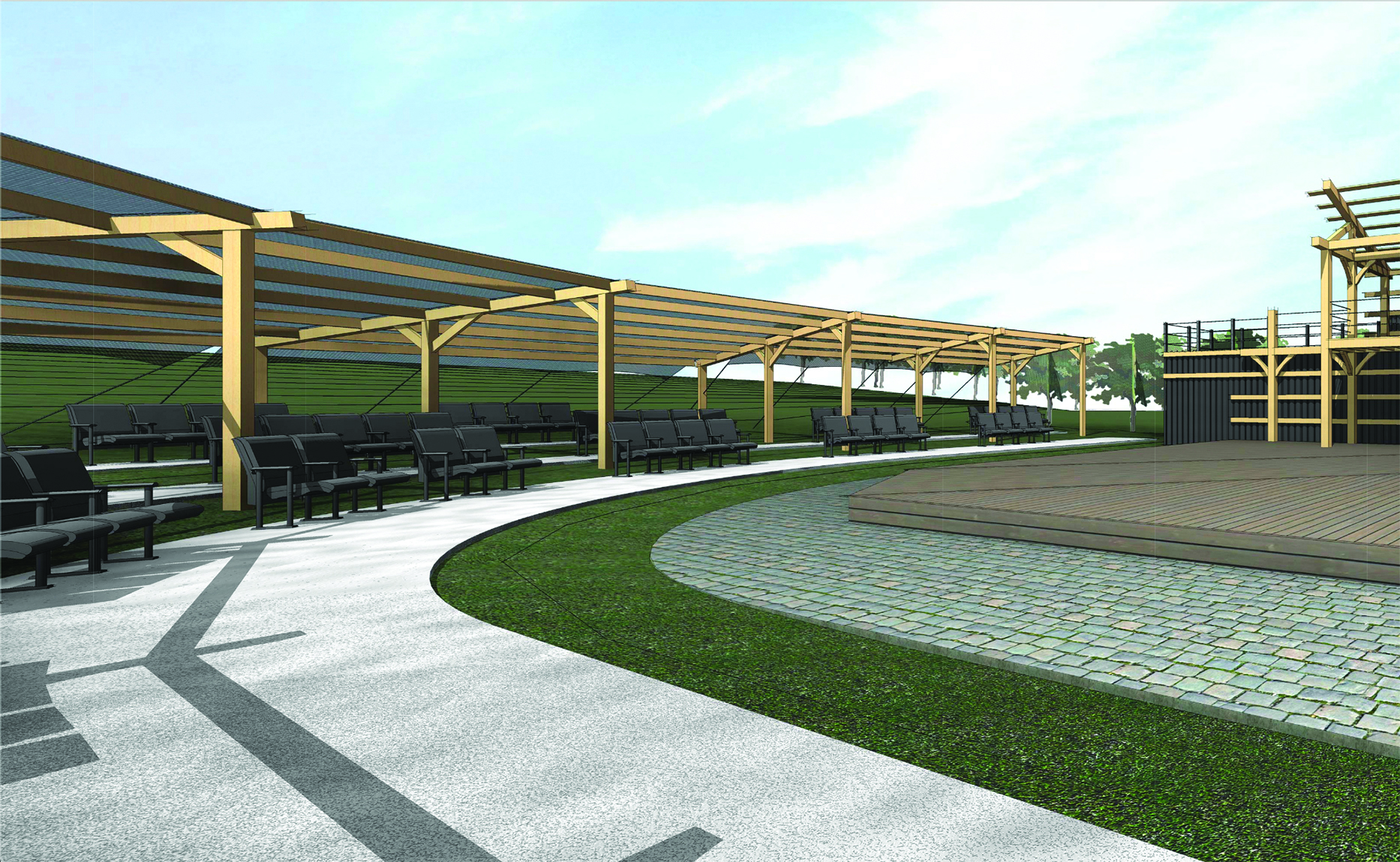 audience. Audience members, he said, will be in a semi-circle in front of the stage, wrapping around three quarters of the diamond stage, which includes two levels to aid in the Festival’s dynamic storytelling.

Garratt said he drew inspiration from other outdoor stages, including the one in High Park in Toronto, on which he has previously performed as part of Shakespeare in High Park.

Audience members, as the pandemic wears on, will be physically distanced outdoors, Garratt said. However, in the future, when COVID-19 is hopefully a thing of the past, the expectation is that the space will be able to accommodate hundreds.

As time goes on, Garratt said he anticipates that the Festival will commission and produce plays with the outdoor space in mind, designing shows specifically to be produced outside as part of the season.

To keep up to date with the possible 2021 season, visit www.blythfestival.com