It is hard to imagine a world without libraries. Even if you are not a reader, these buildings are an important part of our communities and, at some point in your life, you have likely crossed the threshold of one.

Across Huron County, we have 12 branches in communities both large and small. The services they offer are wide-ranging and support citizens of all ages. Libraries are ever-evolving and while their image might have been a place of silence and stuffiness; modern libraries are nothing of the sort. As people and technologies have changed, so have the libraries, but at their core they are a space that is open to, and exists for, all people equally to access knowledge and information for free. That in itself is what makes them magical, and important, and unique.

Several of the Huron County Library buildings are Carnegie libraries, built between 1902 and 1915. The locations in Goderich, Clinton, Seaforth and Brussels remain in use as branch libraries. Additionally, there was a Carnegie library in Exeter. Sadly, it was demolished in 2000 and replaced by a new building in 2002.

Wealthy industrialist Andrew Carnegie was a self-made man who believed in personal improvement and credited much of his own success to the access he had as a young worker to a wealthy man's library. His philanthropic vision was admirably simple, however, the man and his scheme was not without controversy. Some believed he was attempting to buy favour and fame, while others criticized his practices as an employer. However, his legacy still stands, as thousands of buildings across the world that provide what he hoped for: access to knowledge.

In Canada, 125 communities received grants from the Carnegie Foundation. Funding was supplied on the basis of an application by the community, followed by the satisfactory completion of a questionnaire and much of the administration was done by Carnegie's personal assistant James Bertram. Bertram has a Huron County connection as he married Janet Todd Ewing of Seaforth and upon his death his remains were sent back to Seaforth and he was buried in the Maitlandbank Cemetery in 1934.

As you drive around Huron County, the Carnegie libraries stand out as structures with imposing presence and beauty. This was part of Andrew Carnegie's original vision and part of the requirements to qualify for the grant. The style of architecture was not specifically directed, however the buildings were to be grand. They often had steps from ground level to a large front entrance, to signify the elevation of a person seeking knowledge. The ceilings were high and there were often columns. In Huron, all of our examples are built of pressed red brick and still look very stately. It was also true that Bertram, who made many of the final decisions for design, was not a fan of wasted space or too much ornamentation, but the buildings are of the style of their time.

In Goderich, the library is located at 52 Montreal Street, just off The Square. Ten thousand dollars was granted in 1902 and the building was opened with much fanfare in 1905. Due to the unique layout of the Town of Goderich, the building is pie-shaped with three towers, including the imposing three-storey round tower that sits at the junction of Montreal and Lighthouse Streets. It is surmounted by a tall conical roof and has three floors of windows that look out towards the Courthouse and The Square. The entrance from the Montreal Street side is less grand than some other designs, but as you walk into the main area, the large windows let copious light into the double-storey room, which makes it feel very impressive.

A renovation of the original Carnegie structure in 2003 also included an addition that is sympathetically done. You can see parts of the original exterior wall and from the second floor gaze back into the main area through original windows. Not to be missed is the grand reading room in the circular tower. A large table sits in the center of the tower and the room has a hushed feel of a place for quiet contemplation. The original woodwork is still in place and the occasional creak from the old floors adds to the ambiance. 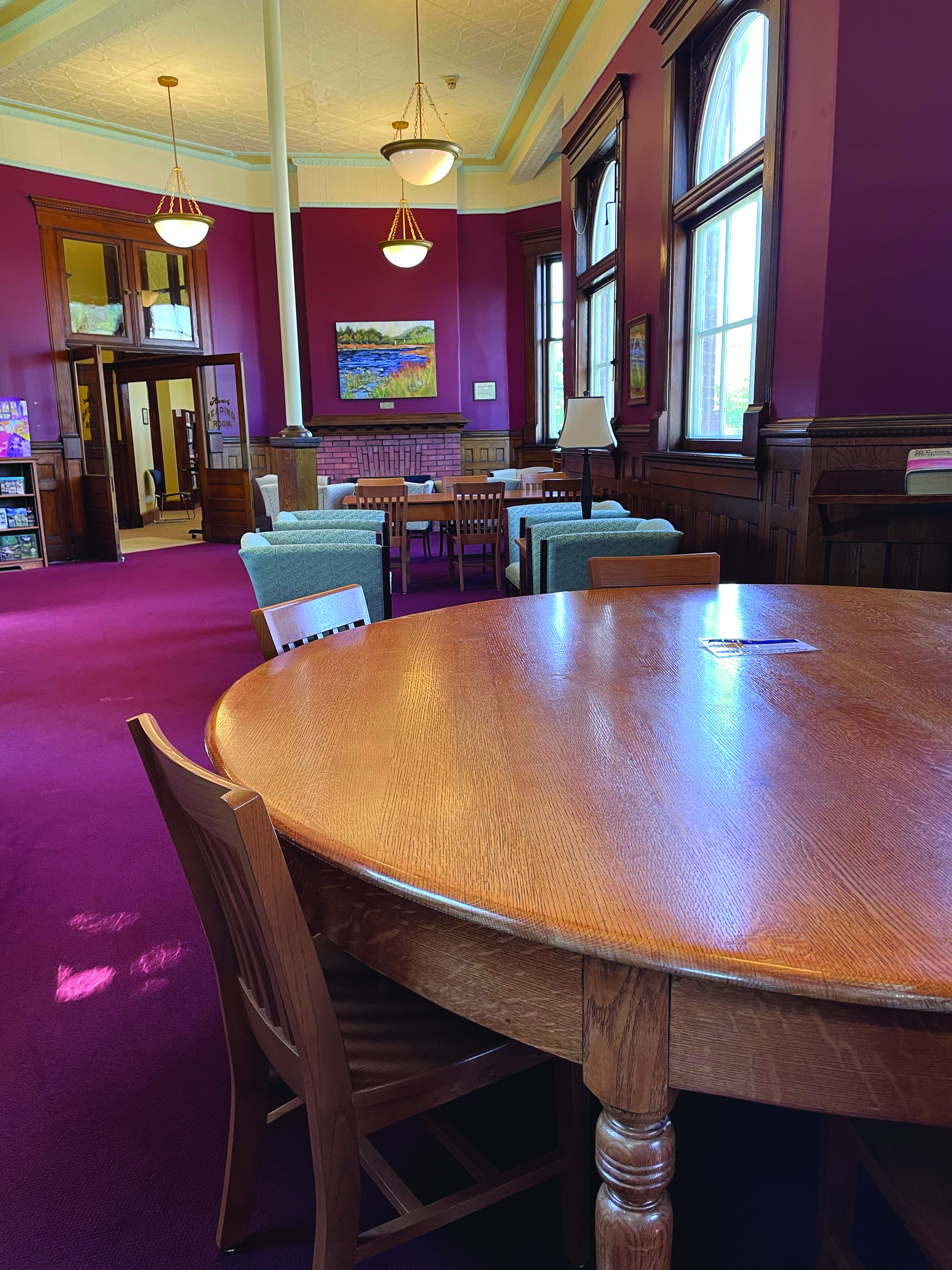 The Reuben R. Sallows Gallery is also on the second floor in the new addition and houses the largest public collection of the photographer's work. It is an astonishing glimpse into the everyday lives of people living in the early 20th century, and well worth a browse. From the outside, it is easy to see that there is a third floor. Sadly this is not accessible to the public, but was once the residence of the librarian, and it is hard not to imagine the romance of living in the attic of a library. The building survived the F3 tornado that ripped through the central square of Goderich in August of 2011 with very minor damage. The devastating storm brought many of the contemporary buildings in town to the ground, but although the library was very close to the path, it was spared. For that small mercy we should be grateful.

The town of Clinton was fortunate to already have a library built with funds from the estate of a local man, James Stavely in 1900.  Stavely Hall at 27 Albert Street, was considered the finest example of a library in the region. When the Carnegie funds were being distributed Clinton was the only location in Canada to be granted funds for an addition to an existing building.

Looking at the building from Market Square, the Stavely portion is on the left and includes a tall tower with an elaborate roof line on the north west corner. The arched windows are large and several have original stained glass. The red brick exterior is highly decorated with brick banding, and the front entrance is up a few stairs within the open vestibule. There is, however, an accessible entrance to the rear of the building. The Carnegie portion is a single-storey structure attached on the south side. It was designed to complement the existing building with a similar round tower that is still in use as a reading room. The building fell into disrepair and was nearly demolished in 1982, however it was saved and restored, reopening in 1984. Sadly, during the renovation all of the original woodwork was removed. They were able to save much of the tin ceiling and the stained glass, which is a highlight today. The restoration also saw the relocation of the children's section to the second floor. The ceiling is open to show the huge timbers that serve to support the roof. The upper part of the Stavely round tower now houses the children's picture book room and has lovely views of the town hall, Library Park and fountain.

The Seaforth Library at 108 Main Street South is a fine example of what we expect a Carnegie Library to look like. A strong square building with two columns on each side of a beautiful set of double wooden doors topped with a stained glass window. It was built in 1912 with a $10,000 Carnegie grant, and one can imagine it held a personal significance for James Betram and his wife Janet, who grew up in the town. Like most of the surviving buildings of that era, changes had to be made to make it accessible to all, so the entrance these days is around to the side and into the bottom floor where much of the collection is shelved. The upper floor is currently used for the children's library and meeting space. While the front doors are not in use, you can still see them clearly from the interior and happily, the grandeur of the original woodwork and high ceilings remains largely untouched. The landscape around the building is beautifully maintained by the local horticultural society.

The Brussels Carnegie Library is one of only six designed with a corner entrance. Bertram was not a fan of this design, as he believed it wasted space. The choice was a good one for the location as the building sits very prominently at the corner of Turnberry Street and Orchard Line. Although the front steps have been removed and the door replaced with a large picture window, the flanking columns and stone carved name remain. The entrance is now to the south side and is fully accessible. The addition built in 2013-2014 has enhanced the original structure and added a community program room. The original feel of the library survives and it has an open and beautiful interior with the classic old library smell. The large windows that are common to most of the Carnegie libraries offer great views of the downtown core of the village. And where the doors used to be is a comfortable reading room.

The Huron County Library system is a thriving group of 12 libraries that are all worth a visit. As a floating collection, you can borrow and return books from any branch with your Huron County Library card. And insider tip: your library card gets you intol the Huron County Museum and Historic Gaol for free!  Libraries are more than just collections of books. There are online resources, digital and audio books, computers and printing services, and great programs and contests.

Check out the website at www.huroncountylibrary.ca for hours, access to the online catalogue, resources and much more.