When James Roy founded the Blyth Festival in 1975, he wanted the Festival to be more than just a theatre so by the second season, an art display was set up in the basement/lobby of Blyth Memorial Hall. As the Festival grew, so did the art gallery and when an addition was added to Memorial Hall in 1990, the Bainton Gallery became a dedicated space for art exhibits. The art adds to the pleasure of those attending the theatre and the plays bring a larger audience for the artists, many of them local.

The Blyth Festival Art Gallery has been part of the Blyth Centre for the Arts’ offering for 44 seasons and this year’s offering will be another great one. The annual season runs from May to September, including the annual Student Show, the Community Show and three professional art exhibits in the Bainton Gallery at Memorial Hall, the home of the Blyth Festival. The gallery is run by volunteers. Admission is free, but donations are accepted.

The first professional exhibit this year is called “Spirits Among Us” by Goderich-based artist Roman Turczyn. It will include agroup showing in various media, including paintings, digital photographs, metal, wood-working and jewelry. Turczyn’s exhibit will open on June 13 and run at the gallery until July 20.

Debbie Schenk from Walkerton will be the next featured artist. Her mixed media exhibit, entitled “Memories Mark Our Journey”, will run from July 26 to Aug. 24. 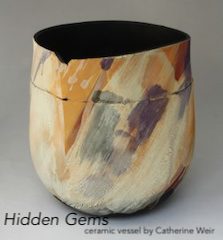 From Aug. 30 until the end of the season on Sept. 28, Catherine Weir and Elizabeth McQueen will take to the gallery with Weir offering ceramic pieces and McQueen showing her paintings. The pottery and paintings will complement one another and they have been created in close collaboration between the artists. The exhibit is called “Heaven and Earth” and those themes are woven throughout the art.

For more information on the gallery, visit blythfestival.com.